Why Does My Dog Growl When It’s Playing? 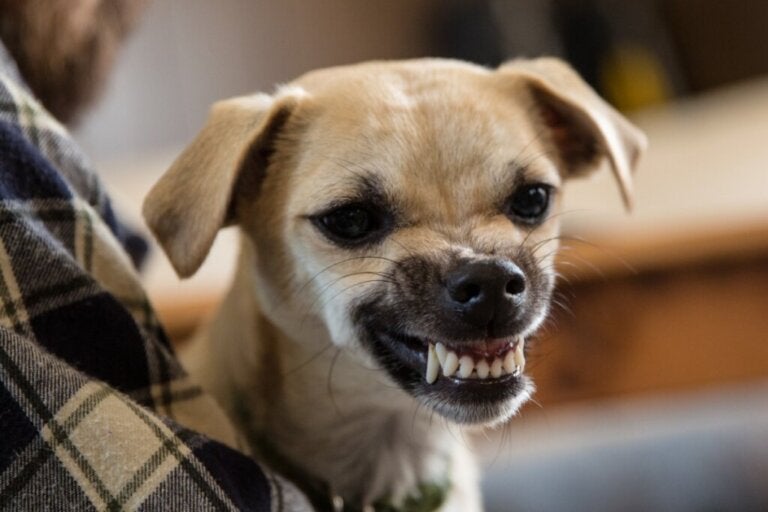 When a dog growls playfully, there’s nothing to worry about in principle. However, you need to know how to distinguish this from when aggression is about to occur.

Dogs don’t talk, but they don’t need to! In fact, their non-verbal language is almost as effective in conveying information as when we have a verbal conversation with another person. However, as with all communication, there can be misunderstandings. And our question today is: why does my dog growl when it’s playing? Are they not having fun anymore and starting to get angry?

It may seem a bit contradictory for a dog to emit angry sounds when carrying out a playful activity, and here we’ll tell you why it happens. The dog’s growl also has its nuances, so take note!

Canids communicate with each other by means of a variety of postures, movements, and vocalizations. Among the latter, we find growls, whose primary function is to warn. When a dog growls, it’s saying that if the other dog continues with what it’s doing then it’s likely to get attacked.

On the other hand, an important part of a dog’s learning is through play. Just as we play by adopting roles where we imitate a certain type of behavior, dogs do the same in a certain way. That’s why, when they play with each other, it’s common to see them growling, biting, and barking at each other, even if they aren’t fighting.

Thanks to this, dogs learn to communicate when they’re puppies, because playing gives them the opportunity to know what a bite is for without it hurting.

The meaning of a dog’s growl

The most basic meaning of the dog’s growl is a warning. By emitting it, the dog communicates that they’re upset or feeling threatened and that, if the other dog doesn’t back off, they could attack. In other words, growling is also a manifestation of discomfort in that particular situation, whether social, competition for resources, or otherwise.

However, dogs can growl for other reasons and guardians need to learn to differentiate the nuances in order to communicate effectively with them. Below, you can learn more about this vocalization.

So how do you know when it’s a warning, and when the dog is playfully growling? The key is the situation and the rest of the dog’s body language. Here’s the best way to tell the difference:

Growl of pain: On the other hand, a dog may also growl when some part of their body hurts. This is usually discovered through physical contact when the dog emits a growl when you make contact with the painful area. This is easy to identify as it’s behavior that comes on suddenly and doesn’t seem to be related to anything visible at first.

What do I do if my dog growls playfully?

If your dog growls playfully, you have nothing to worry about. It’s their natural behavior, as you’ve been able to read in the previous lines. But how do you tell when it’s becoming a warning? What if they’re fighting and you don’t notice?

First of all, don’t be afraid. When two dogs get into a fight, the situation is easy to identify, as the vocalizations are much more intense and the physical aggression doesn’t take long to manifest itself. However, separating dogs in the middle of a fight is difficult and dangerous, so you should avoid getting to that point at all costs.

Here are some tips on how to distinguish between problematic and normal behavior. If you follow them, you’ll be able to identify early on when play is becoming serious:

The most important recommendation is that, no matter how good your dog is, their play and socialization should always be supervised. As with humans, dogs get along better with some people than with others. So, to avoid accidents and keep play situations playful, keep an eye on how your canine companion interacts.