How to prevent the dog from biting 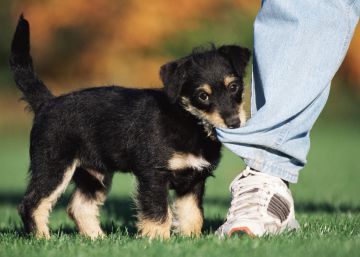 The first thing is to know more. In the vast majority of the 256 deaths caused by dog ​​bites in the United States between 2000 and 2009, according to one study, there was no one person who could intervene (87% of cases); that the dog was not closely related to the victim (85%); that the animal was not neutered (84%); that the attacked could not interact properly with the dogs (77%); and that the dog was isolated and did not maintain regular relationships with humans. All of these seem like preventable factors.

Then there is the issue of race. A study similar to the previous one that analyzed dog bite deaths between 1979 and 1996 also in the United States found that more than half of the assaults were involved rottweilers or type dogs pitbull. At the same time, another investigation confirmed how in a province of Canada in which the possession of pit bulls, the frequency of bites dropped.

What can we do?

If the dog is still a puppy

-Teach him not to bite as part of a game. “When they are young they use their mouth and bite because it is in their nature, it helps them explore their environment,” says veterinarian and dog educator Sandra Real. “But it is very important that they learn from puppies that they can hurt. When playing with him, let them give us little nibbles and when they start to squeeze hard, just do what the puppies do with each other, complain with an Ayyy! and stop the game for a minute so that they realize that they hurt us and gradually have more control over their bite ”.

-Socialize yourself correctly. “To avoid situations of aggression it is convenient for the dog to learn to socialize with what its environment and life will be, but also for people to learn what the needs of dogs are”, continues the Real veterinarian. “An animal without fear will never need to defend itself from anyone. A calm and balanced dog, although it will tend to chase or hunt, will not bite for that reason. “For it to integrate well, it is advisable” to spend time with other dogs of the same age and with a friendly and calm character, which will promote good socialization ”, adds Real.

Canine trainer Annie Phoenix, author of The Midnight Dog Walkers: Positive Training and Practical Advice for Living with a Reactive or Aggressive Dog.

-Sterilize you When the time is right

-That he does not live outside the home, tied up or isolated. “They grow up frustrated, which can lead to being aggressive, just like humans. Dogs need to be residents of the house and not left alone, ”says Phoenix.

What we have to do

-Teach children to interact with dogs. “I think it is very important to train them in what dogs are like, how they communicate, how they relate, what bothers them, what can scare them. The better children know their pets, the easier it will be for them to respect their needs and provide them with a healthy and safe environment “, says canine trainer Sandra Real,” by creating a kind of game the child learns to be educated with the dog. In this way, they will know that dogs are not like other children, that they can be scared if they run up to them, that they often do not know how to manage such direct contact ”. When the veterinarian works with the little ones, she teaches them the so-called “calm signals” which are “gestures that dogs make in different situations and that makes it easier to approach and relate to them”.

-Never leave your dog alone with a child or anyone who is not able to intervene if necessary. “Any dog ​​with teeth can bite, even the sweet ball of fur at your feet. If it is in the situation in which the dog feels that it needs to defend itself, it has those teeth to do it “, justifies Phoenix in an article in the magazine Dogster. “Young children and animals must always be under supervision for the good of the child and for the good of the dog,” says Sandra Real.

-Learn what are normal behaviors and what is not. “Sometimes there are dogs that due to their past, their character, their upbringing, etc., can have behavioral problems,” explains educator Sandra Real. “It is very important to teach adults and children what are the normal behaviors in dogs and what can be behavioral problems so that they know how to identify them and can ask for help from a professional who works on that specific problem, thus avoiding risky situations at home” .

-Know when they can bite. “Watch out if the dog wants to escape,” says Phoenix. “Or if it licks its jaws, sniffs or scratches out of context, it shows the whites of its eyes, it shakes, it barks, it growls.”