Is Rosemary Good for Dogs? 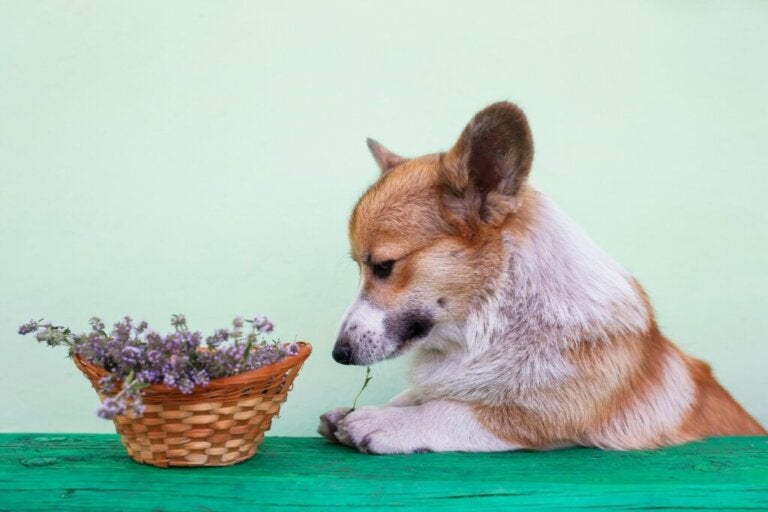 Use rosemary on your dogs to improve their digestive health, control pests, and reduce the pain caused by arthritis.

Humans consume many aromatic plants to take advantage of their medicinal properties. Rosemary is one of them, and so it’s normal to think about the possibility of giving it to dogs. However, we must remember that dogs’ bodies are quite different from ours and certain edible elements for humans can be bad for them.

Rosemary is a plant that stands out for having a very pleasant smell, and so it’s often used in culinary preparations. In addition, people attribute it with benefits in the control of hair loss. Don’t miss the information we’re going to give you below to find out whether or not dogs can get the benefits of this plant after ingesting it.

Rosemary (Rosmarinus officinalis) is a plant species native to the Mediterranean that has been used for thousands of years in traditional medicine. Research articles explain that various properties have been attributed to rosemary, including its antioxidant effect.

In addition to its medicinal use, rosemary is used as a seasoning in a wide variety of preparations. The Egyptians placed it in the tombs of the pharaohs to perfume their journey to the afterlife, while the Greeks and Romans considered it a symbol of regeneration and the Arabs used it as a repellent for pests in gardens.

Rosemary leaves contain between 1% and 2.5% of essential oil, in which components such as cineol, camphor, camphene, borneol, limonene, linalool, and verbenone, among others, are found. All of them are responsible for its medicinal properties. This oil also contains flavonoids and polyphenols, the compounds responsible for the antioxidant action.

Rosemary properties and benefits for dogs

As you can tell, rosemary has many beneficial health properties and the good news is that dogs can enjoy them. This plant compound is non-toxic to canines and can be ingested with other elements of the diet.

This is a common ingredient in the BARF diet, which blends naturally sourced ingredients processed to a minimum. This plant acts as a source of vitamin C, improves the transit of the digestive system, may help regenerate the liver, and promotes the expulsion of waste through gas and urine.

In fact, as rosemary has antioxidant and anti-inflammatory properties, it helps to calm spasms and seizures in dogs suffering from these diseases. Although it can’t replace drugs prescribed by a veterinarian, it’s appropriate to use it as an adjuvant with proper monitoring.

Obtaining the benefits of rosemary isn’t only through ingestion, as dog owners can prepare homemade alcohol with this plant. To do this, buy a bottle of antiseptic alcohol and add a good number of branches.

Leave it in a shaded area for a couple of days and you’ll see how the liquid turns black. The more concentrated it is, the better. As it starts to run out, add more alcohol and more branches in the same container.

How to use rosemary alcohol on dogs?

This homemade preparation can be used directly on the skin and limbs of your dogs. It’ll help relieve the pain caused by osteoarthritis, rheumatism, and contractures. Therefore, it’s ideal for use in elderly dogs or dogs diagnosed with these conditions.

Apply the oil on the affected area and massage gently to activate the product with the heat of your hands. In fact, this medicinal alcohol also works the same way for people. Although it isn’t harmful to your pet, make sure you have veterinary approval before you start using it.

Rosemary water is another way to get the properties of the plant to soothe your dogs. This preparation is very useful in eliminating fleas, lice, and mites in canines. Several studies have been conducted to create rosemary-based products as an alternative against these pests, due to their antimicrobial, insecticidal, and anti-inflammatory properties.

Rosemary water is also used to eradicate zoonotic pathogens such as Microsporum canis. Research has found that infection with this fungus is common (but asymptomatic) and affects the skin, hair, and nails of dogs and cats. Experts have shown that rosemary essential oil is effective against it.

When rosemary water is used to eliminate this type of parasite, it’s necessary to consult a veterinarian in all cases. The home treatment should be reinforced with broad-spectrum anti-parasitic drugs.

How to prepare rosemary water?

To prepare this remedy you’ll need to boil between 1 and 2 liters of water. When the liquid reaches boiling point, add a good number of rosemary sprigs and take it off the boil. You can cover the saucepan so that the steam helps the plant to “release” its benefits.

It’s important that you follow this procedure, as letting the water boil with the branches can modify the properties of the plant. As a final recommendation, use a pot that you don’t mind staining.

Using rosemary for dogs is reliable

Using rosemary on dogs is safe and reliable. You can add it to their food from time to time, use it as alcohol for wounds, and make medicinal water whenever you need it. However, and despite all the benefits that this plant has, it should never replace veterinary treatment.

As a good owner, you should take your furry friend to routine general checkups. You can take the opportunity to tell the vet about your interest in including this plant in their treatment and let them give you their advice regarding the matter. However, remember that no home remedy can replace pharmacological treatment.