Why Does Your Dog Roll in Feces? 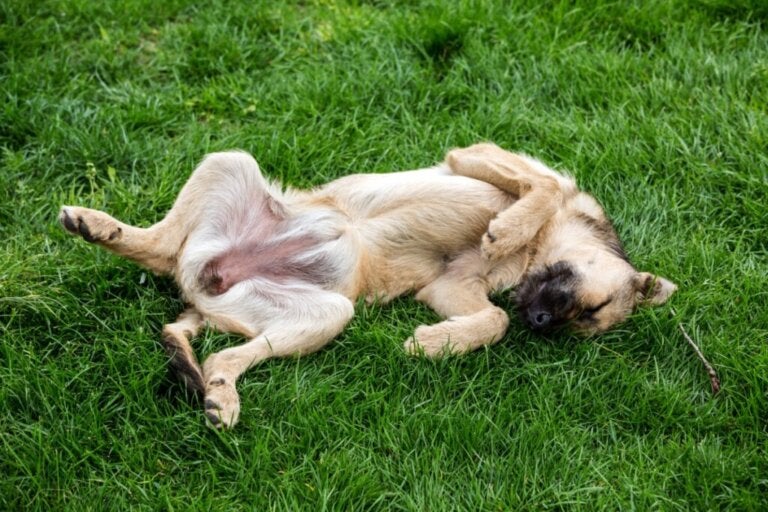 Among the reasons why dogs roll in feces are their hunting instinct and their desire to regain his natural scent. Find out how to avoid this behavior.

If you’ve ever seen your dog roll in feces, you must have thought that it’s a very unpleasant habit. It turns out that, for humans, there are certain behaviors like this that are incomprehensible, but there are reasons behind them that we must consider.

For that reason, in this article, we’re going to look at why your dog does this and, especially, explain how to avoid it. Before starting, it’s important that you not reprimand or punish your pet for displaying this behavior. Once you finish reading, you’ll understand that this and other attitudes are marked by its animal instinct. Let’s see why they occur.

The dog wants to camouflage its scent

Dog owners often want their dogs to smell “good”, which causes them to abuse shampoos and powders at times. Although the smells are pleasing to humans, they may upset the animal, leading them to try to recover an aroma that’s consistent with their nature, such as that of feces.

At the same time, this is also a very frequent natural behavior in the wild and is something that domestic dogs carry in their genes. Rolling in the feces of other species camouflages the distinctive smell of each specimen, making it easier to go unnoticed by its prey and predators.

Wild dogs don’t just roll in feces, but also in the remains of dead animals. All with the aim of not being discovered.

The animal wants to mark its scent

One of the scenarios to consider when your dog rolls in feces is the need to mark the territory with its scent. Although it’s strange for owners, the stools contain traces of pheromones that have the function of transmitting information to other animals.

This is confirmed by professional studies, which specify that pheromones intervene in the territorial and sexual behavior of animals. These aren’t only present in the stool, as they’re also secreted through the air or during urination, for example.

Consequently, your dog will roll in the feces of other dogs to receive the information that members of its species have left there. To do this, the dog begins by rubbing its face. Then, to leave its own mark, it’ll roll the rest of its body. By doing so, it stimulates the glands that pheromone producing glands that it has in its nose.

Due to its hunting instinct

Another behavior that emerges in domestic dogs is hunting. While a well-fed canine doesn’t have the need to hunt for its food needs, its instinct prevails.

When a dog rolls in its feces or that of other animals, it tries to go unnoticed by its prey. This behavior is common in dogs that are natural hunters and have the opportunity to go outdoors. This can also occur in more homebound canines, which hunt balls and toys.

Your dog wants to get your attention

If your dog is rolling in feces, it may also be trying to attract attention. Stress, loneliness, or boredom will cause your pet to develop these and other behaviors so that you pay more attention to it.

Contrary to the previous reasons, this cause requires you to take action on the matter and look very seriously for a solution. The right thing to do is to consult an ethologist or behavioral expert to draw up a plan that will lead the dog to stop doing this. As for you, you should focus on paying more attention to your furry friend without reinforcing this behavior.

How to prevent your dog from rolling over in feces?

Even if they understand the reasons behind the dog’s behavior, it’s normal for guardians to want to prevent this from happening. Of course, you need to keep in mind that it’s not an easy task, as it requires dedication and patience. Here, we’ll tell you some of the options you have in this case.

It’s important not to scold the dog when it rolls in feces, but you shouldn’t reward the behavior either. What you must achieve is that the dog understands that there are other behaviors that you do like. The task consists of leading the dog to respond to your orders and reinforce them in a positive way with treats, such as special food, cookies, words of affection, walks, and caresses.

On the contrary, when it wallows in the feces, you shouldn’t pay attention to your animal. Believe it or not, the canine will begin to understand that doing that doesn’t provoke a response from its owner and that it doesn’t get anything in return.

Keeping an eye on your dog is essential if you don’t want it to roll in feces. This behavior is most likely to occur when the dog is out for a walk and is off its leash. At that time, you must be vigilant and prevent this behavior with an order.

To achieve this, it’s essential that the animal knows how to obey basic commands such as “stop”, “stay” or “come back”. When you sense that it will roll in feces, call it and reward it for obeying you.

If you notice that your dog is always rolling in its stool after a bath, it’s probably not comfortable with the smell of your shampoo. Therefore, it’s best to use cleaning products such as neutral soaps, which have no aroma and allow the dog to continue to identify its natural scent.

In these cases, it’s best to go to the vet to recommend a product according to your needs, since there are many options on the market that say they’re neutral, but that’s not always 100% true. Also, never use human shampoo for your canine’s skin, as the pH of the skin of each species differs greatly.

Go to an ethologist

When the owner has tried several of the alternatives to prevent their dog from rolling over in feces, it’s best to consult an ethologist. Animal behavior professionals will identify why your dog’s doing this and tell you what you need to do.

Keep in mind that these types of alternatives require the absolute commitment of the owner on both a routine and monetary level. Only as a team and with perseverance will negative behavior be eradicated if all else fails.

Did you identify why your dog’s rolling in feces?

Dogs are animals of instincts and some of their behaviors are incomprehensible to humans. This causes some owners to scold or punish the animal because they consider their actions to be disgusting. If this is your case, you should stop. It’s easier to reinforce positive behaviors than to reprimand negative ones.

If after reading this article, you’ve identified the cause of the behavior, you already know how to try to fix it. Try to do it yourself at first, but don’t rule out long-term support from your vet or behavior specialist.