Why does your dog prefer your shoe to the toy that cost a lozenge? 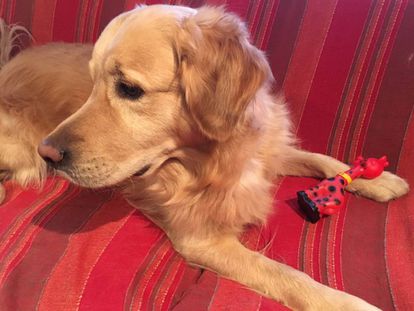 Why do our dogs love some toys and not others? And above all, what do those objects that they adore as much or more than you mean to them?

“Above all, they seek to play with you, they use the toy to get your attention and for you to join in the fun,” explains veterinarian Alicia González, from the Los Molinos Veterinary Clinic in Madrid. “They use toys in two ways, as an alternative to prey, which is when they play alone, and as a way to start and maintain social interactions, with people or other dogs. Most prefer the second option if they can choose, although some choose to play alone and are often described as “possessive,” says researcher John WS Bradshaw, from the Anthrozoology Institute at the University of Bristol and author of the book. Understand your dog. by Editorial Paidotribo

Also Read: Do not do this with your dog in summer
A group of scientists including Bradshaw compared toy play between people and dogs and between two dogs. “The game with humans was more collaborative. When there was only one toy, the dog would leave it to the person who was playing with it, something he would not do if the other player was an animal ”, say the scientists in the article ¿Why do adult dogs play? a review of works published in Behevioural Processes (2015).

“There is a myth among many dog ​​trainers that allowing them to ‘win’ the toy at the end of each game will make them more aggressive or ‘dominant’. There is no scientific evidence to support that,” maintains researcher Bradshaw.

The authors acknowledge that the fact that dogs continue to play when they have left their status as puppies behind does not respond to the perpetuation of juvenile behavior, known as paedomorphosis. “The functions of the different types of game are sufficiently different in such a way that surely they have not arisen from a single evolutionary mechanism”, they affirm. That is, it is not that our companions are eternal puppies. During his life, this behavior appears and has different meanings.

What is clear, it seems, is that playing with our dogs is good. Apart from that, it is for us. “Play is a good way to build the relationship between the dog and his owner,” says Bradshaw, “because they love it.”

“They prefer toys that crumble easily, those that make noise, and those that move unpredictably,” the researchers write in the paper.

If the battered favorite dog of Matilda if she were a living being, she would have left this world on the first trip he took her when she weighed no more than a couple of kilos. And it has continued to subject him to violent shaking. “They exercise their natural hunting instinct with toys when they throw the doll into the air and shake it from one side to the other as if trying to break their neck. That’s what they do when they hunt in the wild, ”says veterinarian González.

And what toys do our dogs prefer? “Friable ones (that is, those that crumble easily), those that make noise, and those that move unpredictably,” the researchers write in the paper. Hence the love of bones, balls, and gutting stuffed animals.

According to the objects to play that are sold the most, they are those that can dispense and hide prizes, stuffed animals, and tennis balls, according to an email from a spokesperson for Tíanimal, which distributes online and in 20 more establishments in Spain of 20,000 products. The number 1 seller is the classic Kong, an artifact that can be filled with sweets, followed by a stuffed animal, a tire on a rope, a teether that also holds prizes, and a tennis ball. “Dogs love to work to get their prize, it stimulates them and it is more satisfactory when they finally get what they want, “they say from the store about toys that hide sweets.” It is important that the animal remains mentally active, so that this type of dispenser helps them combat boredom. “As for stuffed animals,” they usually like much more those that have a whistle inside (small whistle that produces sound when biting or pressing), the more acute the better “, continues the spokesperson, “the reason is that the texture of the stuffed animal reminds them of a small prey and the sound they make when biting it is similar to the screeching it would produce when they bite them.”

Finally, there are outdoor gadgets, such as balls and frisbee. “This category also includes lures or rope toys. It helps them exercise and also works for their owner, which is both stimulating and entertaining. These types of toys should be used from a young age to encourage play and that, when the dog is an adult, it continues with the healthy habit of running and exercising “, they say. For her part, the veterinarian Alicia González warns about the excessive and constant use of ball-type objects: “It keeps them constantly in tension, it stresses them a lot, so you don’t have to abuse.”

MatildaLike many of his colleagues, he has a great fondness (and that means sinking his teeth) into certain flip-flops – preferably soft and expensive – and slippers for walking around the house. By the way, there are also toys that imitate those grandfather’s slippers. “Unlike cats, dogs accept a wide range of objects as ‘toys,’ but when they play alone, they prefer things that change when they play – for example, they love to destroy shoes,” explains Bradshaw, “and for games social objects must be large enough to share ”.