Is my dog ​​jealous? 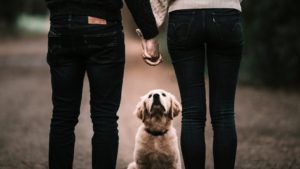 Just like people, dogs can get jealous at times. This usually happens when a new family member or pet arrives, but it can even happen when you give attention to another dog on the street. It’s cute that your dog doesn’t want to share your attention, but it can also become problematic. Here’s how to recognize jealous behavior in dogs and what you can do about it.

How to recognize jealous behavior in your dog

First, it is important to recognize the difference between enthusiasm and jealousy. There are many triggers that can get a dog excited, such as the sound of the doorbell, your voice, or the enthusiasm of another person or dog. For example, when visitors come in and your dog starts barking, it’s probably just to express his enthusiasm. You can teach your dog to deal with these triggers more calmly, for example by shifting his attention at the moment of the trigger.

If your dog tries to get attention every time your attention is elsewhere, he’s probably jealous. This jealousy manifests itself by demanding a lot of attention, being overly affectionate or even growling and becoming aggressive towards other people and dogs. When this is the case, unpleasant situations can arise and it is wise to find out what is causing the jealousy.

A dog becomes jealous when it feels that the bond between it and its owner is in jeopardy. Your attention is his greatest reward and when something changes in this, he will look for extra confirmation. Your dog will do anything to help you pleasen. When another person or dog does this and gets a lot of attention from you, your dog wants to show that he can do this better. Also, dogs are very sensitive to changes in routine. For example, if you start working more or a new family member joins, your four-legged friend can become stressed and insecure. When a change happens very suddenly and is also accompanied by less attention, jealousy is lurking.

When your dog starts exhibiting unwanted behavior out of jealousy, you may want to comfort him or get angry to correct the behavior. However, both reactions are not conducive to unlearning the behavior. When you give your dog attention, whether positive or negative, you are rewarding his behavior and he will do it again in the future. Small forms of attention, such as a pat or laughing at his crazy behavior, also have this effect. While it’s tempting to give your dog attention, it’s better to ignore him and only return attention when he’s calm. This is how you reward good behavior.

Dealing with a jealous dog

When a new family member or pet comes in, a lot of your attention is obviously going to be there. Try to remember that this feels like a threat to your dog and that it can be very stressful. Therefore, be kind to your dog and still try to give him a lot of attention. Reward him when he does something right, even small things. This gives him confidence in your bond and so he doesn’t have to look for confirmation at other times.

In addition, make sure that your dog has a positive association with the ‘intruder’. So do not take your dog away from the situation again and again and let them build a bond with each other, even separately from you. When a big change is about to take place, try to implement it step-by-step into your dog’s routine. For example, let your dog meet your new love a few times before he or she moves in with you.

Show your dog that you are perfectly capable of dividing your attention. Pet him while you are talking to another person or giving another dog attention. Try to involve your dog as much as possible in what you are doing. That way he doesn’t feel left out.

If the jealousy returns in many situations, such as when you pet another dog on the street, try to find out what could be the cause of this behavior. It can be an expression of stress, lack of regularity or trauma. Give your dog sufficient exercise and impulses, but also ensure sufficient relaxation. This way he will be less stressed or restless.

In short, jealousy is an emotion that can also affect dogs and can sometimes manifest itself in unpleasant ways. Don’t punish him, but try to find out if anything has changed that could lead to this behavior. Your four-legged friend likes security and confirmation, so try to give him this as much as possible!